School fundraising ideas – How to run a successful raffle 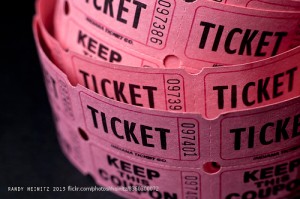 If you are struggling for school fundraising ideas, what better way to raise money for your cause than return to the basics and include a raffle at your next fundraising event!

Raffles are a regular feature in many a fundraiser and can be a great success if they are run well. They are fun for everyone involved, providing excitement for the buyers of tickets that can be shared with the organizers. In addition raffles can be very lucrative for the organization that are raising the money. In this article I will outline how to implement this classic fundraising idea, and how to run a successful raffle.

It is possible to run many different types of raffle. The choice is yours and the decision may rest on the venue in which you are running your event, the time that is allocated to the event, or to the number or value of the prizes that are available to be won. The two raffles that will be outlined in this article are the tombola and raffle draw.

Where do the prizes come from?

One major benefit of running a raffle is that the prizes are donated. This means that any tickets bought provide practically a hundred percent profit. There are a number of ways in which a school can gain donated prizes.

One is to get the children to solicit the prizes from local businesses by writing letters to them, explaining what the school is raising money for, how they intend to do so. The letters should then ask for support for the cause in the form of a physical item to be used as a raffle prize. Success rates will be much higher if the children write the letters. This could also be done in class, as the writing exercise can be very educational and can also be beneficial for the children’s confidence.

Another way to achieve donations for prizes is through parents. Send letters home with the children appealing to parents to donate unwanted items for use at the school’s fund raising event. Again explain the cause and what the money made will be used for.

Promoting the raffle by gauging the desire of prizes

As the children will provide the majority of excitement for buying the raffles tickets, they should be used to gauge which items will be the most desirable prizes. Get them to clap or cheer at varying levels depending on how much they would want the various prizes. The items that create the most excitement and noise will be the best prizes to promote the raffle with.

Hampers, wine, and other prizes that will appeal to the parents rather than the children, should also be used to engage the parents in the raffle. Parents may get bored of buying their children raffle tickets with the chance to only win prizes that cater for the children. However, by including prizes which appeal to adults, the raffle more fun and worthwhile for the parents.

One way to run the raffle is to number all the items allocated as raffle prizes and put them on display. Place the raffle tickets in a raffle drum (also known as a tombola). Charge people to spin and pick tickets from the raffle drum. Tickets picked can be exchanged for prizes if the numbers match.

The tombola can be run continuously throughout the fundraising event, or until prizes run out. This, however, also presents a negative aspect of the tombola; if prizes run out, then the ticket sales will stop. One way to try and prolong the lifespan of the tombola is to fill the raffle drum with many more tickets, and charge slightly less to buy them.

It is also a good idea to give people who do not get a prize a cheap sweet. This will keep the children happy!

An alternative to the tombola is a raffle draw. The tickets are sold throughout the event, and then, at a specified time, numbers are drawn from a hat for each prize. For this to work the prizes must be desirable. However if a raffle draw is run well with good prizes, the winners can be announced at the end of the event, giving people an incentive to stay at the fundraiser for longer. This will give you, the organizers, a longer period of time to sell, feed, and entertain people attending the event, providing the opportunity to raise more money for the school.

A benefit of the raffle draw is that tickets can be sold everywhere, as there is no need for a raffle drum. Ticket books can be given to volunteers preparing and selling the food, volunteers selling items at the ‘junk’ stall, and volunteers can approach people in order to sell the tickets and promote the raffle.

In both cases, incentives should be given to buy more tickets. For example, you could offer tickets at a dollar each, or a strip of eight tickets for five dollars. This will increase the volume of tickets sold, and help increase the profits made from the raffle.

Raffles are a great way to add money to the amount you raise at fundraising events. They are very low cost and are a proven school fundraising idea. Also, the children can get involved, but above all they are great fun!